Come adventure in Adrian Howell’s Psionic Pentalogy world as your own unique character, with the D6xD6 Role-Playing Game! If you’re new to role-playing, you’ll find the game a quick and easy way to get started: Character creation takes only five minutes. If you’re an old hand at the hobby, you’ll find surprising depth to the system, which one reviewer called “the haiku of role-playing games.” Created by four-time Origins award winning game designer Lester Smith, the D6xD6 Role-Playing Game is simple but elegant, a marriage of equality between storytelling and game mechanics. It features two dozen different worlds of adventure by professional authors, with new ones being added regularly. So join the secret psionic war in which young Adrian and his friends have become embroiled, and explore countless other worlds besides. To learn more, visit www.D6xD6.com.

The D6xD6 Role-Playing Game is centered on a single stat, Focus. The more skills you choose, the higher your character’s Focus number. Choose just a few skills, and your character is very focused. Choose many, and your character becomes a jack-of-all-trades. Task rolls are 1d6 x 1d6. Roll high for things you know well; low for things you don’t. That single roll serves as both level of success and turn order, making combat quick and easy. The 72-page D6xD6 RPG Core Book contains all the game rules, plus five sample settings, each of which adds a new layer of character abilities specific to that world. The 200-page D6xD6 RPG Expanded Edition contains all the game rules, plus 26 settings from a range of genres, including the worlds of popular fantasy, sci-fi, and horror novelists. New settings are continually being added—based on the licensed worlds of popular authors, and the game is easily adaptable to whatever genre you please. 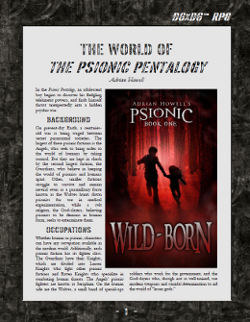 On present-day Earth, a centuries old war is being waged between secret paranormal societies. The Angels seek to rule the world, while the Guardians fight for separation of psionics and humans. Smaller factions struggle simply to survive, while the paramilitary Wolves hunt down psionics for medical experimentation, and the God-slayers are bent on exterminating these “demons in human form.” In this setting written by Adrian Howell, author of the Psionic Pentalogy novels, you can choose your own psionic powers or fight against these “lesser gods” as a pure human. For use with the D6xD6 RPG created by Origins award winning designer Lester Smith. (This setting chapter is included in the D6xD6 RPG Expanded Edition.)